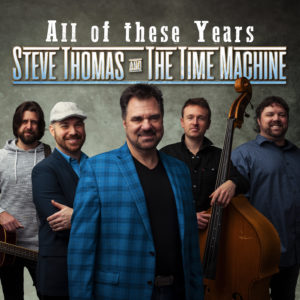 12 recordings of new material and classic favorites …  from Grammy nominee, Steve Thomas and his band, The Time Machine.

Nashville, Tenn. – Been there. Done that. Got the T-shirt.

That adage is no more accurate than used to describe the life and career of Steve Thomas, one of modern music’s most stalwart musicians.

The Grammy-nominee teamed up with Bonfire Music Group, an imprint of Pinecastle Music, for the release of All Of These Years. The collection of 12 songs is as much a celebration of life as it is a testament to Steve’s passion for great songs. It is a project a long time in the making.

“This record represents my 38 years as a professional musician. All the influences and some of the styles of music that I like to play,” says Steve Thomas. “Of course it’s rooted in Bluegrass, but also has the elements of blues and country. I’m very excited to be working with the team at Bonfire Music Group. So many great musicians, writers and engineers that came together to make this project happen.”

Since getting his start in 1982 playing with Del McCoury’s band, Thomas quickly became one of the most in-demand musicians in Nashville, performing alongside the likes of Aaron Tippin, Barbara Mandrell, Kenny Chesney, Brooks and Dunn, John Michael Montgomery, Lorrie Morgan, the Whites and more. Along the way, he has gained the respect of the top performers in the industry, being nominated for multiple CMA awards, along with a Grammy nod (with the Osborne Brothers in 1990).

Thomas was raised on a working farm in rural Montgomery County, Virginia, some fifty minutes outside of Roanoke. The family had one another. It was isolated and not a life of privilege.  Steve was just a boy when his father, a WWII veteran, was diagnosed with cancer and soon after, the family survived a devasting house fire. The family of 7 was offered a neighbor’s small hunting cabin for shelter.

Steve remembers that his resourceful father, though ailing, was inspired to open a sawmill. The 5 siblings all pitched in.

Through it all, there was music; a small community full of music and music-makers. Steve recalls informal jam sessions where old-time music makers on fiddle, banjo, guitar and mandolin would pull rugs back and make music, much as they had done for generations. Young Steve learned to play music, but often left unsupervised, he and his siblings became influenced as much by the church Gospel choir as they were by other teens with less honorable intentions. Steve discovered some of life’s darker trappings, which would continue to challenge him in years to come.

At age 16, Steve had moved to Salem, Virginia where he became acquainted with the New Acoustic Music Scene: Boone Creek, The David Grisman Quintet, New Grass Revival and The Tony Rice Unit classic, Manzanita. By 18, Steve had met Tim Austin and eventually, the two formed the original Lonesome River Band with Jerry McMillan and Rick Williams. Eventually, Steve learned that Del McCoury was in need of a fiddler and Steve landed the spot, while still filling out his schedule with LRB. In 1983, Steve accepted an offer to go to Nashville and play with the Grand Ole Opry’s Jim & Jesse, and says, “At that point, I was in the game for good.”

He met and married his wife, Janet, married, and started the job with Jim & Jesse. The years to come would see the couple endure multiple moves, the challenges of Steve’s life on the road, the highs and lows of both opportunity and loss. Steve played with the iconic groups including The Whites and the Osborne Brothers, and toured with Brooks & Dunn. He collaborated with some of his musical heroes, and played on records by acts like Aaron Tippin and Barbara Mandrell. He performed at venues from one coast to the other; Branson, Las Vegas and more. The challenges weighed on Steve, and he found himself prey to some of those old influences including drugs and alcohol.

Steve’s is a story of great success and disappointments, brimming with comedy, tragedy, and eventually redemption and grace. He found his way back to sobriety, spent years in rehab, but also continued to play with artists like Lee Ann Womack, John Michael Montgomery. With Janet’s love and support, he struggled his way o a new chapter and a much better place. He began to teach music, but always kept a hand in recording and performing, eventually stepping out of the role of sideman and into the spotlight under his own name.

First came an unlikely novelty hit with Mark Newton, “Old McDonald Sold the Farm,” which climbed to #1 four times and finished in the top four most played songs in 2014 on Bluegrass Today’s chart. A meeting with Lonnie Lassiter resulted in a plan for an album of Steve’s own, with his newly formed band. The Time Machine is Jason Owen on guitar and vocals; Josh Matheny on Dobro and vocals; Chris Wade on banjo and Austin Ward on bass.

Music fans got the first taste of new music in the form of the lead single, “Down In The Wildwood.” The song features Thomas’ band The Time Machine all performing in a style similar to the legendary Del McCoury. To date, it’s turned many heads within the Bluegrass / Americana community, quickly charting on the Bluegrass Today Weekly Airplay Chart. Steve Thomas and The Time Machine also took fans for a ride in their fun-filled official music video for the song (watch HERE).

The title track was written by Jason Cope and Wesley Bayliss of The Steel Woods. It features Thomas and the band’s unique take on the song, transformed as an Outlaw anthem to a hard-hitting Bluegrass / Americana version. Other standout tracks include the must-hear ballad “Since Love Came Around,” which Thomas penned in addition to three other tracks. The group tackles genre favorites like Bill Monroe’s “Rocky Road Blues,” plus a unique take on Flatt & Scruggs’ “We’ll Meet Again Sweetheart” which serves as the closing cut on All Of These Years.

Like so many other artists and groups, Steve Thomas & The Time Machine are eager to get back out on the road. Fans can keep up with the band on the official website. While there, visitors will be able to find latest news stories and upcoming tour dates. All Of These Years is available now.

All Of These Years Track Listing:

“Steve Thomas is one of the most talented guys I’ve ever met! Not only is he one of my favorite fiddlers on earth, he is also an amazing singer-songwriter and is a genius on mandolin, guitar, and any instrument he touches. On top of all that, he’s a genuine nice guy! Do yourself a favor and check out his new project.” – Shawn Camp

“Great songs, great players, infectious groove… all the elements necessary for a BIG ol’ hit, if you ask me.” – Larry Cordle

“What can I say? Steve Thomas is the entertainer.” – Lorrie Morgan