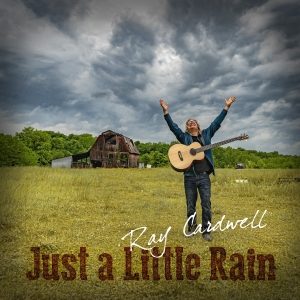 Nashville, Tenn. – As the anticipation for Ray Cardwell’s forthcoming album Just A Little Rain continues to build, the singer is excited to announce the release of the project’s latest single. The track “Born To Do” is available now, and is the newest offering from the upcoming record. Set for release via Bonfire Music Group on September 25th, the collection includes 10 recordings, all showcasing Cardwell’s dynamic vocals and style. Fans can get the new single HERE.

“This has been such a difficult year for musicians and fans alike,” explains Ray Cardwell. “I’ve missed playing music and visiting with friends and family. Recording was such a great release. We all enjoyed our time together. I can’t wait to share this new pocket full of songs with you. I hope to see you at the festivals next year!”

The upbeat “Born To Do” is a hard-driving bluegrass tune that stays true to Cardwell’s humble beginnings in the genre. This feel-good anthem features the empowering lyrics, “It’s a hard hard life, but it’s the one I choose. I’m just doing what I was born to do.” In addition to lead vocals and bass by the Missouri native, the recording features Danny Roberts in the producer’s chair and on mandolin, Adam Haynes on fiddle, and Tony Wray on banjo and acoustic guitar, plus Jaelee Roberts singing tenor vocals. It was engineered/mixed by Scott Vestal at Digital Underground Studio.

When Just A Little Rain becomes available on September 25, fans can expect Cardwell to pick up where he left off on his previous project, Stand On My Own. In addition to the lead single “Rising Sun,” co-written with Louisa Branscomb, the songs feature other co-writes with Daryl Mosley and Danny Roberts, as well as songs written by Rick Lang, Stephen Mougin, Rich Schleckser, John Dillon and Al Green (see track listing below).

Getting his start performing regionally with The Cardwell Family in the Show-Me State, the collection of tracks were heavily inspired by the singer’s musical upbringing, which included stops at venues and bluegrass festivals throughout the ‘70’s and ‘80’s, along with performing as a member of New Tradition in the ‘90s. The album closes by showing a softer side of Cardwell in “Constant State of Grace.” A heartfelt ballad co-written by Irene Kelley and Darrel Scott. (see track listing below).

To keep up with all things Ray Cardwell, fans can visit raycardwell.com for tour dates, news stories and more!