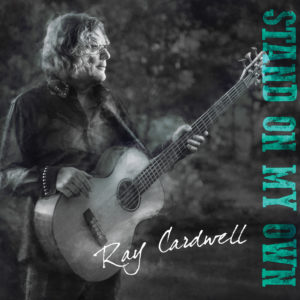 Nashville, Tenn. – Progressive Bluegrass/Americana singer Ray Cardwell has continued to gain steam with the release of his latest solo project, Stand On My Own, which came out earlier this year. The singer/songwriter is excited to announce his next single, “New Set of Problems” from the critically-acclaimed album. Released via Bonfire Music Group, the newest collection serves as Cardwell’s sophomore project, and includes 12 new recordings, two of which have already gone on to top the charts. Fans can purchase and/or stream the brand new single HERE.

“Having grown up in the Midwest, the influence of the Ozark Mountain Daredevils was, and is still, a prominent force in my style,” says Cardwell. “When ‘Supe’ played the song for me I fell in love with its hapless attitude about life, and the grass-is-always-greener, tongue-in-cheek approach. I knew it would be good for this project. I believe it fits right in with the sound I was reaching for.”

“New Set of Problems” offers a progressive and unique twist compared to the previous singles. The Americana-Country vibe showcases Cardwell’s powerful voice, which has turned heads since getting his start performing regionally with The Cardwell Family in the state of Missouri. The anthem was written by Michael “Supe” Granda (of the Ozark Mountain Daredevils) and Mark Horn. The chart-topper is also working on a very special video, which is slated for release in the very near future.

Stand On My Own has already created a significant amount of buzz, cranking out two No. 1 singles on the Grassicana Weekly Airplay Chart with “Time to Drive” and “Alright.” The previous single, “Hurricane Rain” went on to peak at No. 2. The Missouri native’s songwriting is on full display, penning an impressive nine of the project’s 12 tracks. Music enthusiasts can learn more about the album by visiting Ray Cardwell’s official website, which also lists upcoming tour appearances. While there, visitors will also be able to purchase a physical copy of the project, check the latest news stories and more.