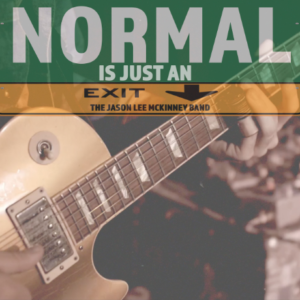 Nashville, Tenn. – Bonfire Music Group recording artist Jason Lee McKinney is an award-winning songwriter, college music professor, and his band is carving out their own way into the Roots music genre. They just unveiled the first track from their upcoming project, which made its debut earlier this week on American Songwriter. It’s the first taste of new music from the upcoming full-length album Pieces, set for release on February 21. Fans can download and stream the new single HERE.

Fueled by a bluesy sound and twin guitar leads, “Normal is Just an Exit” kickstarts Pieces with plenty of fiery fretwork. It’s the title track, though, that fully embodies the album’s concept. Co-written with McKinney’s son, Zion, “Pieces” is a tribute to new beginnings and forward momentum, set to a soundtrack of anthemic melodies, searing guitar, and gospel harmonies. “This song is the essence of the whole record,” says McKinney. “It bonds elements of the band’s sound together so thoroughly, it creates a new compound.”

Lean and lively, Pieces shines a light on McKinney’s songwriting, which has already earned the group a Top 10 hit in Texas (2016’s “Lisha’s Leaving”), an ever-growing number of national and international tours, and multiple industry awards, including a Josie Music Award for Male R&B Vocalist of the Year in 2019 and an Independent Country Music Association award for Artist of the Year in 2014. Mixed with contributions from longtime bandmates Barry Strauser and Billy Wright, as well as background vocals from fellow Memphis-based soul artists Reba Russell and Susan Marshall, those songwriting chops serve as the bedrock for some of the band’s most groove-heavy performances to date.

“I’ve always loved the groove and musicianship of funk and jam bands,” says McKinney. “I just wondered if the wide open arrangements caused some people to overlook how amazing the songs were. I aimed to write songs with the musicianship, grooves and melodies of those types of bands, but with tighter, cleaner arrangements.”

A rock & roll intellectual who holds a Doctorate, an MBA, and a BA in Management, Jason Lee McKinney is smart enough to know when he’s creating his best work. And Pieces — released via Bonfire Music Group and filled with diverse, driven songs that are every bit as electrifying as the band’s celebratory live show — represents another musical milestone, pairing some of McKinney’s sharpest writing to date with a band that continues to fire on all cylinders.