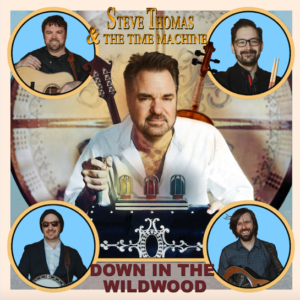 Nashville, Tenn. – Grammy-nominated performer Steve Thomas is excited to announce the release of his latest single, “Down In The Wildwood.” Serving as his first single released via Bonfire Music Group, it features his band The Time Machine all performing in a style similar to the legendary Del McCoury, who Thomas got his start playing with. Fans can download and stream the edgy new single HERE.

“I wrote this song to celebrate my 37 years with my sweet wife Janet,” says Thomas. “As the line in the song says, she’s still here and the love’s still strong.”

“Wildwood” is an upbeat single which showcases Thomas’ world-class band. With a very relatable message and clever melodies, Steve Thomas and the Time Machine deliver a song and vibe that is perfect for the fall season about finding love, down in the wildwood. The band has a very special surprise coming up for fans, as the fun-filled video is set to be released in the upcoming weeks, and includes Thomas playing the role of preacher. Nashville fans were also in for a very special treat over the summer when the band performed the song live at the legendary Station Inn.

Other industry elites taking note include Marty Raybon, who says “I have always been a Steve Thomas fan. Smoking!!!” Larry Cordle agrees, stating “Great song, great players, infectious groove… all the elements necessary for a BIG ‘Ol hit if you ask me.”

Since getting his start in 1982 playing with Del McCoury’s band, Thomas quickly became one of the most in-demand musicians in Nashville, performing alongside the likes of Aaron Tippin, Barbara Mandrell, Kenny Chesney, Brooks and Dunn, John Michael Montgomery, Lorrie Morgan and more. Along the way, he has gained the respect of the top performers in the industry, being nominated for multiple CMA awards (with The Whites), along with a Grammy nod (with the Osborne Brothers in 1989).

Fans can learn more about Steve Thomas and the Time Machine by visiting their official website HERE. While there, music lovers can check upcoming tour dates, latest news stories and more!