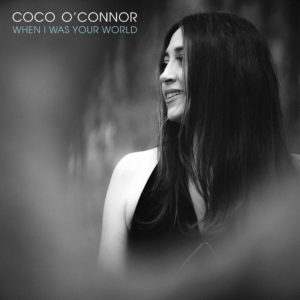 Nashville, Tenn. – The wait is finally over, as Americana singer/songwriter Coco O’Connor releases her brand new album, When I Was Your World. The result is a full collection of 10 recordings produced by powerhouse industry veteran Bill McDermott (George Strait, Tim McGraw, Emmylou Harris), along with engineering by Steve Marcantonio (Dolly Parton, Roseanne Cash, Vince Gill). Also performing on the record from the Muscle Shoals area includes the world-renowned Will McFarlane and The Shoals Sisters, who have each performed with top Soul legends like the late Etta James. Fans can download + stream the full record HERE.

The first taste of the new record came in the form of the lead single, “When I Was Your World.” Serving as the title-track, O’Connor teamed up with award-winning songwriters Rick Beresford and Deanna Walker, who co-wrote the single alongside Coco. The track showcases the singer’s softer side, with its touching lyrics and melody. The title was inspired by O’Connor’s daughter, and the song evolved from there. The Boot gave music enthusiasts an exclusive premiere of the official video for the track (watch HERE).

A major highlight on the record includes the album’s opening cut, “Honey Bee.” Coco takes a different approach on the song, with its Americana leaning instrumentation, showcasing a darker side. Fans are in for an even bigger treat, as the video for the track is set to be released in the next month. Other standouts include the stripped down “Trophies, Tiaras and I Love You’s” and “White Horse” (co-written with hit songwriters Mark and Stephanie Brown). There’s plenty of variety on When I Was Your World, spotlighting several different elements encompassing a combination of Americana, Folk, Roots and even Bluegrass influences.

As part of a special promotion for the record, O’Connor is offering fans a chance to receive a copy of the record, plus a digital copy of the album and vintage photos for FREE (just pay the shipping costs). Check out the offer HERE. To learn more about Coco O’Connor, visit her official website to check the latest news stories, tour dates and more.