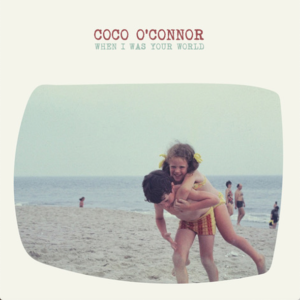 Nashville, Tenn. – Americana singer/songwriter Coco O’Connor is back with her powerful new ballad, “When I Was Your World.” The track serves as the title-track, and first taste of what fans can expect from her forthcoming Bill McDermott produced record coming in February 2020 via Bonfire Music Group. She also teamed up with award-winning songwriters Rick Beresford and Deanna Walker, who co-wrote the single alongside O’Connor. The feel-good anthem is now available for download and streaming HERE.

“The song was originally inspired by my daughter. I was just blown away that I was ‘the world’ to this little, new person in my life,” explains O’Connor. “So during a songwriting session with Rick Beresford and Deanna Walker, I blurted out the title, they loved it and we were off to the races. We knew it was something special because as we were writing the last verse, both Deanna and myself got pretty emotional. It’s a song dealing with all aspects of any relationship – from the newness of it all to eventually the loss and everything in between.”

“When I Was Your World” showcases O’Connor’s softer side, with its honest lyrics and heartfelt melody. Carrying on the momentum from her previous 2018 release, This Ol’ War, the ballad is a perfect fit going into fall, with its sound capturing an array of different influences ranging from Americana to Country to Bluegrass. The brand new single caps off a huge year for the Alabama-born singer, who was recognized earlier this year with an award from the International Acoustic Music Awards (IAMA) in the Bluegrass/Country category.

There are a lot more surprises in-store as the buildup to the full release of When I Was Your World continues. Recorded at Blackbird Studios and Dog Den Studios in Nashville, Coco teamed with some of the top producers and songwriters in the business. The result is a full collection of ten recordings produced by powerhouse industry veteran Bill McDermott (George Strait, Tim McGraw, Emmylou Harris), along with engineering by Steve Marcantonio (Dolly Parton, Roseanne Cash, Vince Gill). Also performing on the record from the Muscle Shoals area includes the world-renowned Will McFarlane and The Shoals Sisters, who have each performed with top Soul legends like the late Etta James.

From the album’s opening track “Honey Bee,” it’s clear that the songstress is taking an invigorated approach to the record, and nothing is off limits. With other standouts like stripped down songs “Trophies” and “White Horse” (co-written with hit songwriters Mark and Stephanie Brown), there’s a variety of several different elements encompassing a combination of Americana, Folk, Roots and even Bluegrass influences.

To keep up with all things Coco O’Connor, fans can visit her official website HERE. While there, they’ll be able to purchase music, check out the latest news stories, upcoming tour dates and more.